Today there is even a recipe for the most important meal of the day: breakfast. Many people – and I must admit that I could also include earlier – go in the morning without eating anything out of the house to have. Finally he has no time!
But the time you have to take it, because with a delicious breakfast to start the day in a better mood.

This is also Ramona, on her blog “Frl. Moonstruck kocht!” the Blogevent “Dining morning as a… Miss!” has started, which is exactly this topic is: the breakfast. Whether sweet or savory, simple or complicated, everything is permitted. One condition, however, there: it should be vegetarian. As I promised the event, I went right for ideas for a suitable recipe. 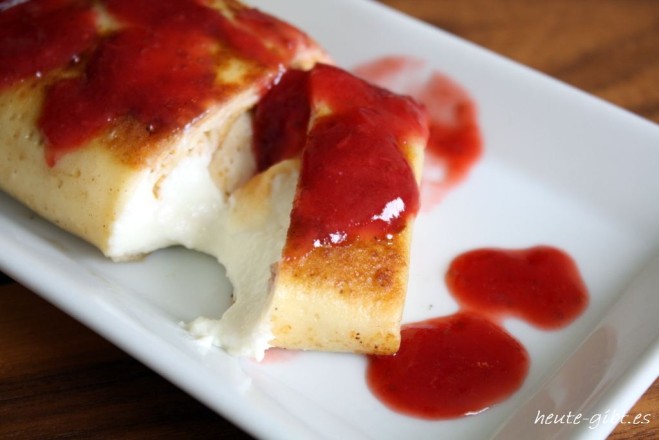 What is my favorite breakfast? Hard to say which varies depending on your mood. Since I do not like the taste pure milk and yogurt, so something comes to me out of the question. Mostly I eat then rolls, omelette or – when I later or not have to work – something like pancakes or crepes.

Today was such a day. I had enough time in the morning to conjure up my treasure and me something delicious. Decided I was then for something that will probably not many know: New York Blintzes. The recipe I have from “Cynthia Barcomi’s Backbuch“Which I – as the other baking books of their – really can only recommend. The blintzes I made with two different fillings: a quark and a fruit filling.

Here is the delicious recipe: 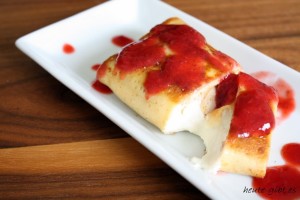 For the fruit sauce:

For the fruit filling:

Mix all ingredients together. Done 🙂

For the fruit sauce:

Combine all ingredients in a saucepan, cover to a boil over low heat and simmer for a few minutes.

For the fruit filling:

If you two fillings, each half is sufficient for the blintzes amount indicated above. According to Cynthia Barcomi obtained from the ingredients 18 blintzes. But this depends both on the pan size and the thickness of the blintzes. In my case I get a 26er pan of ten.

Ready fried blintzes can be stored for a few days in the fridge and then warmed up in the microwave according to Cynthia Barcomi. A freezing is possible: Then bake them for about 15 minutes at 180 ° C in the oven.
I myself can not say details, but since the blintzes were swallowed immediately 😉 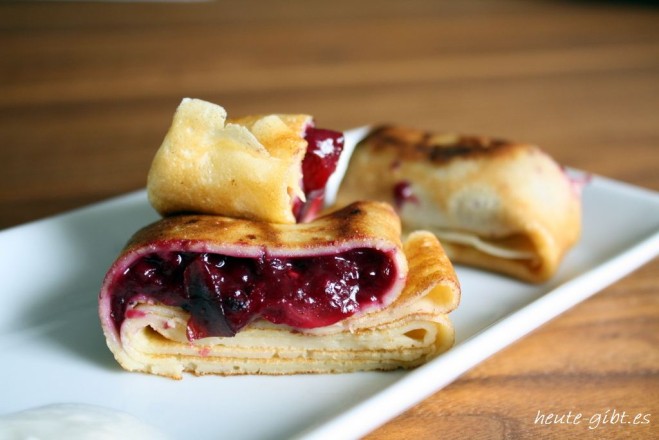 So if you are in the morning times have the time, you should give a chance to blintzes. You're worth it!
If you have no time: She tried from time to assume you 😉

P. S. As already mentioned makes this recipe to the following blog event with: